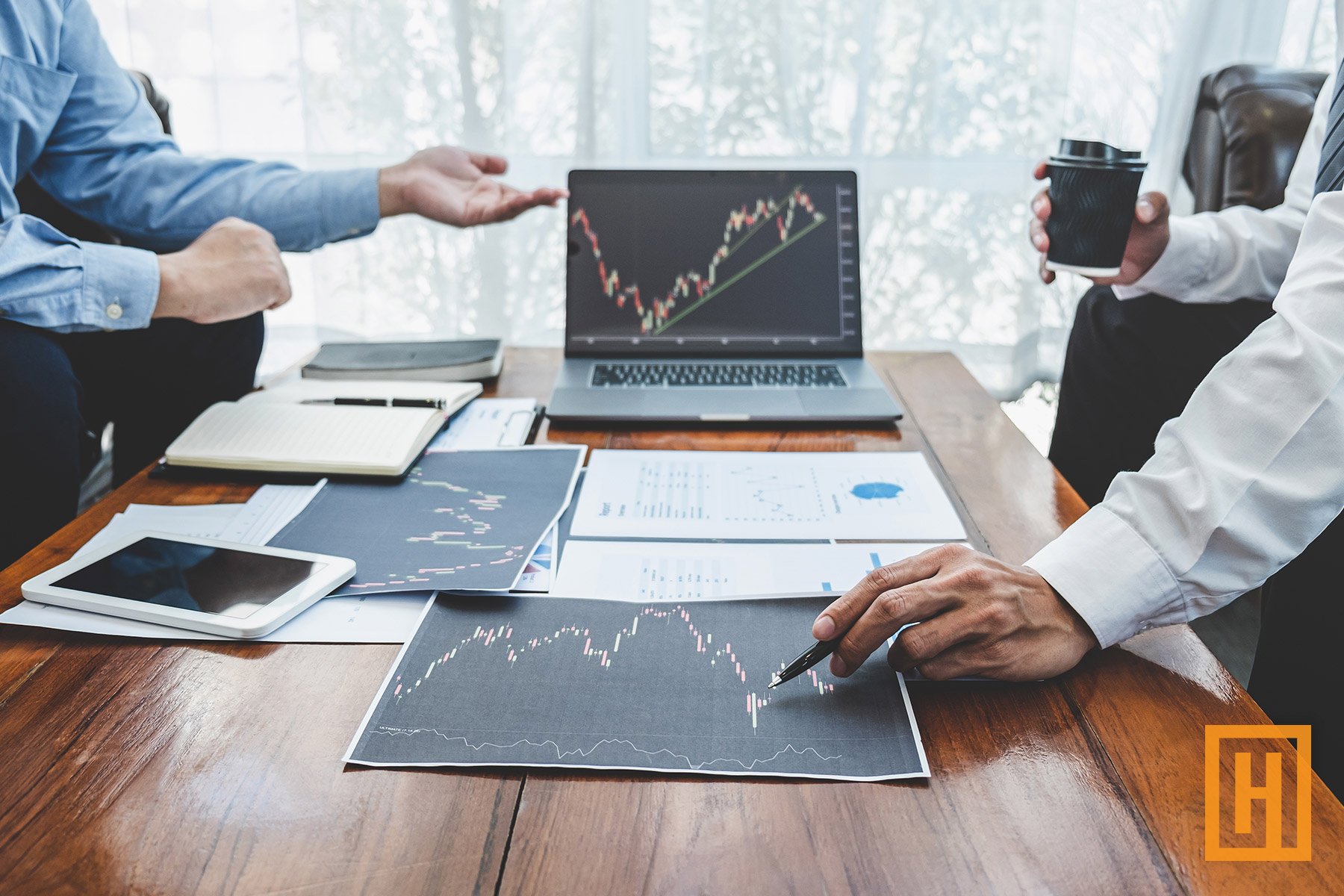 The Hilton Capital team shares an overview of the insights discussed during its most recent investor call.

Hilton Capital Management’s CEO Craig O’Neill kicked off the most recent quarterly investor call with a solemn acknowledgement of the health crisis that has gripped the nation and offered Hilton’s support to those who are fighting through illness and the courageous front line medical workers who have stepped up in this time of need.

Bill Garvey, Hilton’s Founder and Co-Chief Investment Officer began the investor portion of the call recapping the historic conditions we have all found ourselves embroiled in. Garvey, who founded Hilton’s Tactical Income Strategy in the months immediately following the terrorist attacks of 9/11 2001, has been a calming and commanding presence over the past several weeks.

“In conjunction with the selloff in equities a liquidity crisis emerged across all fixed income markets,” he began. “The carnage spilled into municipals, preferreds and emerging markets…. Markets entered into a new paradigm. We were confronted with a severe health crisis, an economic shock as businesses across the country were closed and a potential financial upheaval.”

Garvey noted the positive aspects of the rapid government intervention on a bipartisan basis, “resulting in significant gains in the equity and fixed income market” toward the end of March. “The lessons learned from 2008 have already paid dividends as relief has been extended across numerous asset classes. At Hilton the challenge is to maintain discipline and follow a process that has served us well since 2001.”

He closed his portion of the remarks by offering cautious optimism for the future and suggesting patience. “Solutions to these problems will not be solved overnight,” remarked Garvey. “The health crisis is the foremost concern and undoubtedly American ingenuity will prevail. Patience will ultimately be rewarded… The markets will provide clues as to when it is prudent to return to a normalized asset allocation.”

As is customary on the Hilton investor calls, Co-Chief Investment Officer Alex Oxenham offered a deep dive into the leading economic charts and indicators that factor into the investment committee decision process. Below are highlights from the presentation.

Consensus and alternate views of GDP heading into 2020 were for continued deceleration of economic growth at 1.8% to 1.9% rate. The pandemic and subsequent economic shutdown changed everything considerably. Current projections range wildly from -9% best case to -40% worst case scenario for actual GDP growth. Much of the data typically analyzed by Hilton in the economic deck will be momentarily without merit as the decline in fundamentals have no precedent. Lastly, the true unprecedented nature of this moment comes to light in reviewing the data as most leading indicators were showing signs of strength coming into 2020 and even accelerating midway through the quarter. The sheer size, speed and scope of the shutdown is even more apparent when benchmarked against these data.

Conference Board of US Leading Indicators.
Data typically degrades 15 months before contraction. Ironically, in February the data broke out portending potentially higher than anticipated growth for 2020.

Inflation.
Due to the high correlation between oil prices and inflation, Hilton routinely monitors oil prices to predict if and when it will impact inflation and, in turn consumer spending. Oil prices dropped precipitously in Q1 due to the economic shutdown impacting demand and the continued tension between OPEC producers. These actions artificially suppressed oil prices, which will likely remain low. Hilton will be watching inflation numbers closely to understand how the US government’s $4 Trillion infusion will impact these figures and once the virus has passed.

US Initial Jobless Claims.
For months the Hilton team has been talking about the inflection point as there is typically a period when the data weaken. Through March of 2020 the data remained solid but the recent wave of mass unemployment claims hastened the increase in claims to an historic level that would have been impossible to model. In fact, the labor market was showing signs of improving between December 2019 and January 2020 with four hundred thousand additional job openings coming online, indicating the job market was beginning to heal from the trade tensions.

Oxenham noted on the call that as of March 20 there were 3.3 million unemployment claims filed, followed by an additional 6.6 million claims at the time of the call. (Immediately following the call 6.5 million additional claims were processed.) He further proffered that these figures were likely low as there are approximately 17 million people in the US that work in the travel and restaurant industries. Furthermore, the benefits extended by the government have actually incentivized employees to furlough workers because the enhanced benefits are superior to what they can offer. He concluded regardless of where figures ultimately land, incomes will be severely reduced this year and that some of this data might therefore come back and that while typically a solid data source and predictor of future recessions, initial jobless claims would have to be excluded from models at this time.

Single Family Homes.
Heading into the crisis, single family home sales were still on the rise. Oxenham noted that this will be the first recession on record that will begin in a positive single family home sales climate, further indicating the disconnect between leading indicators and the current economic reality. He went on to surmise that the combination of the new low interest rate regime and pent up demand from an inability to show houses and perform closings in person, that sales should remain strong coming out of the shut down.

Energy.
Hilton expects a significant percentage of US oil producers to become insolvent in the coming months. The impact of government intervention and the ongoing supply battle among OPEC producers will make the energy sector particularly unpredictable for the balance of 2020.

US and International 5 year Returns.
The United States is still vastly outperforming the rest of the world even as all global returns continue to slide. Oxenham pointed out that the correction has occurred at the same level globally, thus the delta between the United States and all other economies remains the same.

Fixed Income.
Because the Federal Reserve aggressively intervened in the investment grade market there has been slight improvement from the bottom. But there has been little movement from the bottom in the junk bond market. Subsequent to the call, on April 9th the FED intervened further down the credit spectrum to support portions of the Junk Bond market, MUNI’s and some MBS.

Credit Spreads.
Thus far in 2020 we have witnessed an unprecedented spike in corporate credit spreads and a complete collapse in US interest rates. Once the market begins to normalize these low interest rates will likely remain for years. One area of potential risk that Hilton is monitoring is trouble surrounding Europe’s sovereign credit.

Conclusion.
Oxenham and the investment team at Hilton remarked in their independent segments how the Federal Reserve has unlimited quantitative easing at its disposal and has been quick and supportive when called upon to unlock the debt markets. The team believes the Fed’s balance sheet could grow to a staggering $10 Trillion level, which would be historic. As the nation and the world continue to test the depth of this recession, Oxenham spoke to the potential length by drawing upon prior data.

Typically a “Bear” market will last approximately 1.3 years and the average recession in the United States lasts 1.7 years. While it’s instructive to look to the past, it’s important to understand the risks associated with a complete collapse of financial, economic and credit at once. Depending upon the success of the government intervention and the relative strength of the US economy compared to the rest of the world heading into the health crisis, Hilton remains cautiously optimistic that the United States will weather the storm.

Once the economy is allowed to “normalize” with workers allowed to return to the workforce and social distancing measures ease, fundamentals will once again be worth examining and should shine a light on what lies ahead.

Hilton Capital CEO Craig O’Neill concluded the presentation with a brief discussion on asset allocation in Hilton’s primary portfolio strategy, Tactical Income. Because the team had positioned the portfolio for a slow growth economy in the late stages of recovery and a probable recession in 2021, a significant amount of risk had already been removed from the portfolio.

The investment team began trimming the portfolio by the end of February and by the end of March, slightly more than 22% of the portfolio was repositioned to cash. Despite the ongoing adjustments to take off risk in equities, “the breadth and speed at which fixed income assets fell apart was incredible,” remarked O’Neill. A question arose during the Q&A section of the call as to when the team might be prepared to invest deeper into equities to which the team responded they would, “like to see the VIX below 35 consistently, a flattening of the number of active cases of the virus, and credit spreads to tighten somewhat before we add risk in equities to the portfolio.”

The biggest portfolio change in equities at the end of the first quarter was in financials. The team exited energy entirely, reduced exposure in REITs and repositioned certain equities to companies with stronger balance sheets. Fixed assets proved more difficult to manage though the investment team was able to make more significant changes on the preferred side and increased the allocation in treasuries.

Reflecting on the difficulties presented by the fixed markets, O’Neill said, “The unique aspect of this correction relative to other corrections is that the ‘risk off' part of the market broke down for a few days. For a few days in March there were no asset classes that worked.” 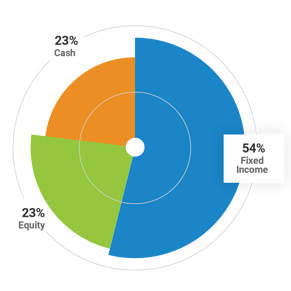