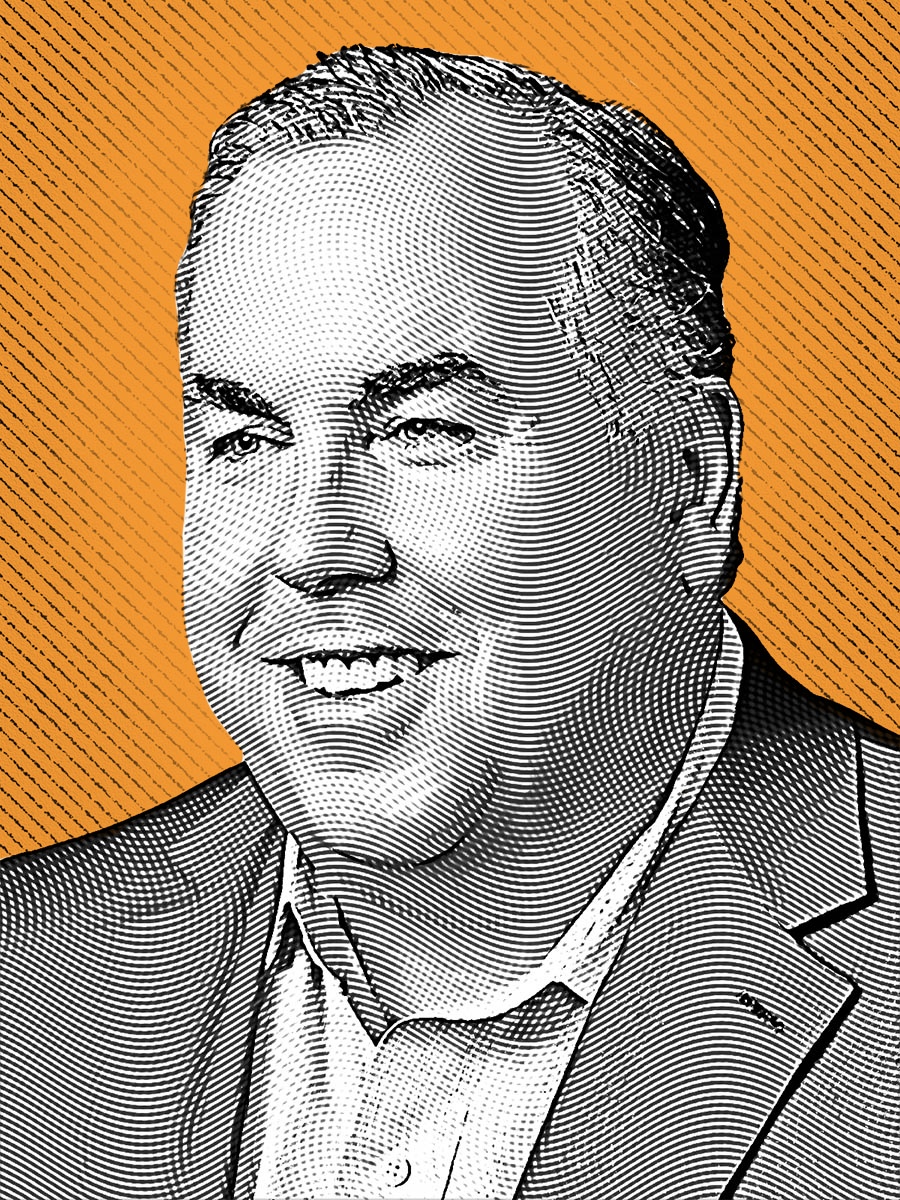 “The opportunity right out of school was clearly on the sell-side,” says Craig O’Neill, CEO of Hilton Capital.

“Selling is a great skill set but I was looking for training and experience that would allow me to control my own destiny.”

Of course, the thing about destiny is that no one ever truly controls it. Like so many on Wall Street, destiny had other plans for O’Neill.

The first thing one notices about Craig O’Neill is his smile.

He has a way of setting a room at ease when he enters and making everyone feel at home. This warm sense of calm and assuredness has become a hallmark of Hilton Capital team members, something O’Neill personifies. Yet, as much as this comes naturally to O’Neill and his team, it’s no accident. “Hilton prides itself on a high level of service to our customers. As important as it is to be great at managing assets, it’s just as important to understand our customers problems and needs.”

O’Neill came to Hilton Capital officially in March of 2010, but he had known Hilton founder Bill Garvey for several years prior. “Bill started in commodities and had a strong fixed income background,” said O’Neill. “I had a good look at equities throughout my career so we are often on the same page but with complementary skill sets.” The two shared thoughts on the markets for years and had struck up a deep friendship when they began talking about joining forces in 2009. “Hilton was really gaining traction around this time, which was even more impressive considering the state of the markets during the financial crisis.”

By the time O’Neill joined Hilton Capital, he had already spent decades carving out an impressive niche on Wall Street. Twice, in fact. The first chapter of his remarkable career was as a partner of Cohen, Duffy & McGowan, an Equity Options Specialist on the floor of the American Stock Exchange. In just a few short years, O’Neill worked his way from a clerk on the floor to trader, specialist and then partner of the firm. The firm grew to become one of the top option specialists on the AMEX before the partners decided to sell in 2001. “The thing to understand about that time is that we were trading our own money. Every day you went home with 95% of your net worth on the street. It’s amazing how much we take for granted now with the power of computing and automation,” continues O’Neill. “Back then you were making a market on the fly, literally doing the math in your head. And as a specialist you had anywhere between 15 and 150 people in front of you trading while keeping track of hundreds of option markets.” As intense as those years were, O’Neill is grateful for the experience. “I certainly came out of those years battle-tested.”

“The thing to understand about that time is that we were trading our own money. Every day you went home with 95% of your net worth on the street.”

Being battle-tested would prove to be more important as O’Neill moved into the next chapter of his career. Immediately after selling the firm, destiny would indeed intervene for O’Neill and the rest of the world.

“There was a long corridor we used to walk through every day after exiting the subway to head to work...

I had brought my daughter to work that day, she was five at the time. I didn’t know it yet but the first plane had already hit and when we came through corridor I realized something was very wrong.”

Having just sold his business, O’Neill was still with the new ownership when the world stood still on September 11, 2001. “We heard the whining of the second plane’s engine then suddenly there was just debris everywhere,” recalls O’Neill. “I carried my daughter in my arms from lower Manhattan and up the east side to my brother’s apartment. It took a while to settle in and figure things out, but you had a sense from the beginning that somehow everything had changed.”

O’Neill spent the next three months working from the exchange in Philadelphia while crews worked to put Wall Street back together. “I continued with the company through 2003 but was feeling the tug of entrepreneurship. Hedge funds were exploding at the time so I worked with a couple of guys I knew in the industry to establish a boutique prime brokerage firm. These were essentially the back office for hedge funds that would clear and settle trades, and provide stock loan, leverage and capital introductions.

“I carried my daughter in my arms from lower Manhattan and up the east side to my brother’s apartment. It took a while to settle in and figure things out, but you had a sense from the beginning that somehow everything had changed.”

“When we started, no one was servicing the lower end of the market. There might have been 2,500 hedge funds when we formed the company, but by 2008 there were literally 12,000 registered hedge funds.” It was during this period that O’Neill approached the Rafferty family to open the Prime Brokerage business under their broker dealer. The Rafferty’s already had a substantial presence in the industry. One of the nascent holdings in their portfolio was a firm known as Hilton Capital.

“Competition was outrageous. There was a feeding frenzy with everyone trying to grab a piece of the hedge fund explosion,” says O’Neill. “We added layers to remain ahead of the curve, such as a traditional sell-side institutional desk.” The business continued to grow even as margins tightened and O’Neill was poised to ride out the competitive storm. But the Rafferty’s, as it turns out, had different plans for O’Neill.

By the time the Rafferty’s approached O’Neill about joining Hilton Capital, he had already forged a bond with Bill Garvey.

“Larry Rafferty knew he had a winner on his hands with Bill,” explained O’Neill. “They were looking to surround Bill with infrastructure and they thought my experience in building business lines would be a great complement. Hilton already had incredible relationships and Bill’s approach to risk mitigation with a focus on return was rock solid and really winning people over. My job was to build on that trust and create operational room for Hilton to grow so Bill could focus on the core strategy.”

Just prior to O’Neill joining Hilton, the firm made another All-Star acquisition. Literally. Hall of Fame New York Islanders legend Clark Gillies joined Hilton and investment in Hilton’s core strategy began to soar. “All of the pieces were coming together at a time there was still so much concern and mistrust in the markets. But probably the most important move in those early days was finding Alex.” Alexander Oxenham who is now a partner and co-chief investment officer of Hilton Capital. Prior to Hilton he was a senior portfolio manager at HSBC Private Bank. “Alex was a tremendous addition for us because it allowed us to build some depth on our bench and demonstrate growth to our investors as well. From there it’s all been about building scale and operational capacity to allow our investment team space and time to maneuver.

Having built a mature infrastructure to allow Hilton to scale, O’Neill has since shifted his attention to the mechanisms of scale.

“My goal is to increase distribution through marketing, strengthening the sales force and treating the advisor community with gold standard service. When you think about the broader investment marketplace, you know there’s a fundamental aversion to risk but also a need for income. That’s what makes Bill’s concept so appealing.

“So the job is to introduce it to as many institutions and as many advisors as possible. There’s a very real argument to be made that Hilton’s core Tactical Income Strategy should be part of every portfolio, period. The key is to continue providing the same high touch service that our clients have enjoyed for years and maintain our internal culture.”

Contact us today to book Craig for corporate, media, or conference engagements.

Hilton Capital Management (“HCM” or the “Firm”) is a registered investment adviser with its principal place of business in the State of New York. HCM and its representatives are in compliance with the current registration requirements imposed upon registered investment advisers by those states in which HCM maintains clients. HCM may only transact business in those states in which it is registered, or qualifies for an exemption or exclusion from registration requirements.
HCM’s website is limited to the dissemination of general information regarding its investment advisory services to United States residents residing in states where providing such information is not prohibited by applicable law. Accordingly, the publication of HCM’s website on the Internet should not be construed by any consumer and/or prospective client as HCM’s solicitation to effect, or attempt to effect transactions in securities, or the rendering of personalized investment advice for compensation, over the Internet. HCM does not provide tax or legal advice. You should contact your tax advisor and/or attorney before making any decisions with tax or legal implications. HCM does not make any representations as to the accuracy, timeliness, suitability, completeness, or relevance of any information prepared by any unaffiliated third party, whether linked to HCM’s website or incorporated herein, and takes no responsibility therefore. All such information is provided solely for convenience purposes and all users thereof should be guided accordingly. Past performance is no guarantee of future results. Any subsequent, direct communication by HCM with a prospective client shall be conducted by a representative that is either registered or qualifies for an exemption or exclusion from registration in the state where the prospective client resides.
For additional information about HCM, including fees and services, send for the Firm’s Disclosure Brochure using the contact information herein. Please read the Disclosure Brochure carefully before you invest.
Copyright 2020 Hilton Capital Management. All rights reserved.